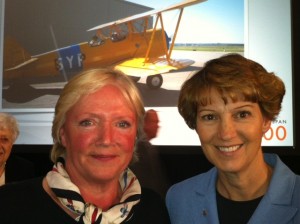 To date, there are very few women in aviation. In fact, the numbers from an international trade group called Women in Aviation, says that only about 4% of the 500,000 non-pilot jobs in the United States are filled by women. It is this type of inequality that I see as the sort of challenge that drives me to precipitate change. It is that drive and spirit that assisted me and my partners when we discovered oil in Belize. It’s that spirit that helped us transform a country and bring the holistic business model to the world. It is this spirit that we are going to use to change the world of aviation.

I have been very excited to get involved in the field of aviation. It is such a thrilling industry that inspires a feeling of freedom, glamour and courage. I, of course, was exposed to flight and aircraft as a small girl coming from Northern Ireland where air travel is common throughout Western Europe. As I grew older, I truly enjoyed continuing traveling as my career in geology took me to far off place such as South America, Asia, Africa and Australia. I never actually considered getting into the business side of aviation until 2002, when my young cousin Josh Stewart came to stay with me in Denver. He had been struggling in the direction of his career and realized he was not truly fulfilled, while being frustrated at not reaching his full potential.

In 2000, I attended an Educo seminar in which I learned how to use the power of the thinking process. When used properly, it accelerates my clear vision and brings about the results that I could only dream about.

Since Josh was at a crossroads in his life, I suggested that he also attend the Educo program before he made any major life changing decisions and find out what his passion really was. Josh, a pilot by profession, knew it would involve flying as he knew his passion was in aviation. He jumped at the opportunity to attend the seminar and find out his true direction in life.

After Josh returned from the seminar, he got to work launching XJet. Following an unshakable vision, he created the most unique, distinctive and  exceptional business model focusing on a 7-star service mantra. XJet has placed in the top 3 every year since 2011 as the “Best in the Americas” in Aviation International News’ annual survey validating Josh’s mission. It also boasts being named in the Robb Report as the Best of the Best and achieved the AIA Award for Design, along with many more.

During XJet’s infancy, Josh asked me to invest in the company which I recognized as rare opportunity. I gladly accepted and have been thrilled ever since I had enough of a clear, focused mind to recognize the chance of a lifetime.

Recently, XJet held a Wings Over the Rockies event to raise awareness in children and teachers of the sheer joy and freedom of flying. In attendance was Lt. Col. Eileen Collins, who was the first woman to pilot the Space Shuttle in February 1995. In July 1999, she continued to make history by becoming the first woman to command a Space Shuttle mission. Prior to her space exploration experience, Lt. Col. Collins was  an Air Force pilot teaching math at the U.S. Air Force Academy in Colorado Springs. She retired from NASA in 2006, but has been a huge advocate ever since of the promotion and growth of women in the field of aviation as well as developing our young women into leaders, role models and innovators. She is also the honorary chairwoman of the new Spreading Wings Teacher Flight Program at Wings Over the Rockies. The program aspires to provide a flight experience to one teacher in every school so they may pass that experience on to their students.

Lt. Col. Collins spoke about her many missions in outer space to a captivated audience. She has many admirable attributes that seem to command attention and engage all those she encounters. In addition, she is very approachable and charming, making everyone feel at ease. I can really relate to her passion for sharing her story since I share that same characteristic. She is definitely someone do be admired.

Also in attendance was Greg Anderson, CEO of Wings Over the Rockies. WOTR is committed to encouraging young children to follow their dreams in aviation. They achieve this through getting the teachers involved through programs such as the Teacher Flight Program and by raising awareness in the schools and by hosting events at the aviation museum.

So another one of my many missions is to disrupt the aviation industry by encouraging and growing the role of women within the industry. I can’t do it by myself, so anyone out there that is interested in joining this mission (man or woman), contact me. Let’s make difference!

A Denver Post journalist was also in attendance and wrote a lovely article about the XJet event. Read it here.