Northern Ireland-born Susan Morrice struck oil in Belize, but, she tells Helen Carson, it was a discovery that owes much to walks around Fair Head on the north coast as a schoolgirl 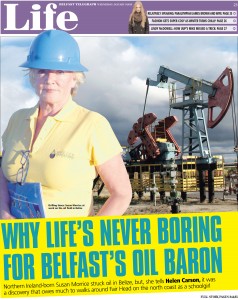 A Northern Ireland woman who literally struck oil in her career wants to bring her incredible business nous back home. Belfast-born Susan Morrice (60) claims there is oil and gas in the province – and she should know, as the expert geologist struck oil in the Central American country of Belize after petrochemical giants Shell and Mobil both failed to do so.

“I was told by people in the industry ‘don’t do this Susan, you will ruin your career’. But I knew there was oil there. We struck oil with the first wildcat well. It usually takes 10-15 wildcats before you hit oil.”

That was over 30 years ago, now Susan lives in Denver, Colorado, and has founded her own oil company Belize Natural Energy (BNE).

Despite being and international player in the oil world, and counting former US president Bill Clinton, who she has known since he was governor of Arkansas, as one of her best friends and supporters, Susan still talks with an Ulster accent – with not a trace of that transatlantic drawl others pick up after less than three decades away from home.

So, where does this amazing ability to discover the ‘black gold’ come from? Believe it or not on a school field-trip to Co Antrim with the encouragement of a very enthusiastic teacher, according to Susan.

“I had a great geography teacher, Miss Weir at Ashleigh House School, now Hunterhouse College. She took us on field trips around Fair Head near Ballycastle and I thought to myself ‘could this actually be a job?’ I loved the rocks, the nature and the sea.”

By this time Susan was seduced by mother nature, despite her parents’ best efforts to get her to follow in her father’s footsteps in the family business.

“My father Eric was an ophthalmic optician at a business founded by my grandfather Tom Morrice – T Morrice & Sons in Arthurs Square, Belfast.

“My family had a good crack at getting me into the business, but I loved the outdoors and wandering across Fair Head more than becoming an ophthalmic optician. It was interesting to them, but not to me.”

Susan did take on board, though, her parents’ unstinting belief that she could do anything she set her mind to.

“My mum Irene always told me to follow my passion, ‘do what really makes you happy’, and my father said ‘anything is possible’. This advice was terribly important to me when I was growing up.”

Susan is the eldest in the family and her sister is Jane Morrice (59), formerly of the Women’s Coalition and head of the ECU in Belfast, now working at the European Commission in Brussels.

They also had a younger brother Arthur who passed away aged just 39.

Susan simply says of the loss, which she doesn’t want to elaborate on, and her late parents: “I feel them all with me, that is a part of understanding life. You take the positive things and you go forward.”

Having found her passion at school, Susan went on to study geology at Trinity College Dublin which she describes as ‘fun’, before getting her first job in the oil and gas exploration business with American Canadian Stratigraphic, which had headquarters in Denver.

“I left Northern Ireland for America in 1978 after I graduated. My first memory of going to the US is driving to Denver from Texas. I stopped the car in the middle of nowhere and looked around at the 360-degree view and realized that anything was possible, just like my dad had said. It was just me and my dog in the car. I thought to myself at that moment ‘this is the American dream.’

“He said to me when I left ‘get away with you and find oil’.

And Susan would come to understand how this self-belief is part and parcel of life in the oil business.

“An old oil pioneer Wallace Pratt, who was also president at Shell, would say ‘oil is found in men’s minds,’ to which I would add ‘what about women’s minds?’”

In this sense she is something of a pioneer herself, breaking the ground for women in a male-dominated industry.

She has not only explored onshore and offshore in the USA, but also in Europe, the UK, Ireland, Belize, Costa Rica, Asia, Africa and Australia. As well as finding oil and gas, she has managed large-scale energy projects which include both independent and major oil companies.

During Clinton’s administration, Susan was invited by the United States Secretary of Commerce Ron Brown to represent the energy sector to the Trade and Peace missions held in Spain and Ireland. And in 2010, Susan was invited as one of the top 50 US women CEOs to Washington, DC to attend a conference sponsored by Fortune Magazine. Guests at this event included President Barrack Obama and Hillary Clinton among others. She’s met Obama too and says “he had a very tough job to do”, but adds he is very much on the same wavelength as her – “he wants to get the best out of people”.

Despite all her experience, though, the task of finding oil in Belize was one of Susan’s toughest challenges.

“It got to the stage where all my oil colleagues were saying to me ‘get a life’, but when we did hit oil they called me up and said ‘how the hell did you do that?’.”

But it was a meeting of minds that made that ultimately led to the Belize success story.

“My original business partner Mike Usher was from Belize and he wanted to make a difference in that country to find oil and create prosperity. He wanted to go back and was sure there was oil there. We met 28 years ago and it was his dream to do this.

Susan, who believes very much in the human spirit, said: “We realized then there was something bigger at work – that we had found our passion and spirit. Every well has been named after him, Mike Usher 1 right up to the latest, Mike Usher 22.”

After the oil find, the expertise of BNE was sought out by the industry worldwide, and Susan is very proud of the company’s approach to this multi-billion pound business.

“We are the first holistic oil company in the world. We have won the Green Award, the only oil company to have done so. We are also the first to have a horizontal well, it is a great way to drill and means there is no need for fracking. This has to be win-win for everybody involved. Environmental revenue of 50-60% goes to the Belizean government.” 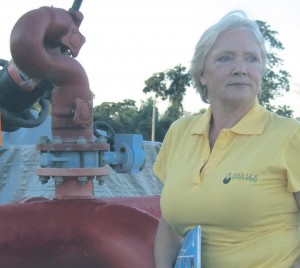 The company also employs 96% of its staff from the Belizean community and has set up a trust of more than £2m to provide education. There is also a company-backed programme to fund entrepreneurship and business start-ups in the region Susan believes in that very American concept of ‘giving back’.

“We are not in the business of getting in there, grabbing it (the oil) and running.”

BNE, though has attracted some negative press. Allegations of a share scandal and some corrupt dealings were levelled at the business.

These claims are calmly dismissed by Susan: “We have had challenges in the form of hostile takeovers. It got nasty, but it didn’t work, that is the outcome of being positive. When you find something so big, other people want it. That is why it’s so important that the vision you had in the first place is clear and that it takes you all the way through to your final goal.”

And having used her Ulster stoicism to deal with so many demands, Susan wants to ‘give back’ to these shores too.

“I want to come back to Northern Ireland and do what we have in Belize. And yes I think that will happen. There is oil and gas in the province.”

Northern Ireland had its first taste of oil prospecting back in 1965 when the Marathon Oil Company was granted a permit by the then Minister of Commerce Brian Faulkner to search in Mallaghfad Forest, Co Fermanagh.

Susan says she is the ‘second wave’ of this exploration, which is again keen to mine the gas potential in Co Fermanagh.

“We will work carefully with local people, and it will be very, very good for cross-border trade. We have the best team in the world and it must be done correctly because it is all about balance.”

While she hasn’t lost her accent, I ask Susan if she is fazed by the resurgence of sectarian strife in the streets of Belfast? Having embraced American culture so much, is she glad she left?

“I don’t think I would’ve formed my own oil company had I stayed in Northern Ireland, but I am keen to engage with the entrepreneurial spirit here.”

Of course she is optimistic that the right approach can overcome even the most entrenched communities: “The way forward to overcome the sectarian agenda is to help people follow their passion. When your life is full you won’t want to turn the TV on and live like that.

“Instead of being the boy who picks up the rock to throw it, be the boy who looks at the rock and maybe discovers gold.”

By way of example Susan tells me about her eldest daughter Hannah (18) who is studying to be a pediatric nurse. She has another daughter Clare (14).

“Hannah took me to one side and said ‘mum, I’ve something to tell you, I’m pregnant’. I so felt the old-fashioned Northern Ireland judgment hitting me like torpedoes. But I thought ‘no’, I am happy with Hannah and I told her that. Then I watched the love and happiness bubble up in her face.

“I’m going to be a granny in May, and we are all going to do it together. But it was a good lesson for me to always focus on what is in front of you.”

The new arrival is not the only change is Susan’s life this year: “I’ve just come through a divorce, so I’m now a single mum. It’s a big change in my life, but once it is done you get on with life – things happen, it is how you deal with it. Whether it’s a hostile takeover or a divorce, my philosophy is onwards and upwards. You have to get on with it for the sake of your children.”

But it was Susan’s youngest Clare who, it seems, it taking after her mum: “If I ever feel sad about my parents and I’m thinking about my mum, Clare always says to me ‘don’t be sad, your mum is in your heart’.”

And while Susan is a proven expert at making the most of natural resources, there is something else she feels we must all tap into – people.

Every employee in BNE has membership of the on-site company gym.

Susan, of course, believes in well-being for everyone in the company, saying it is core to their philosophy.

“Everybody uses the gym and they notice how that carries over into their productivity. It goes hand in hand with success, in fact, it is essential.”

She works out too – everyday as well as walking for both exercise and fun.

“It is amazing being 60 and it just gets better.

“I’m very fit and healthy with a clear mind and positive attitude. I have an enthusiasm that keeps me young.”