Susan Morrice and BNE Pick Up Award in London 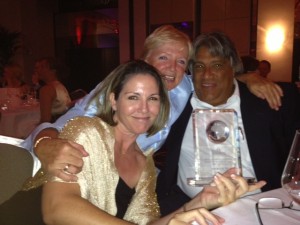 The category for which BNE was nominated and won is ‘Learning at the Core.’
According to a company statement, “TheGetEnergy Awards Committee recognized the significant and sustainable quality of the work in which (BNE) have been engaged and its benefit to the wider oil and gas energy industry over the past year.”
BNE also said, “This success would not have been possible without the hard work and dedication of the
Adult Education Programme participants, video production team, the Belize Natural Energy family and all those in Belize and throughout the world who took the time to place their votes. It was reported that your overwhelming support “crashed” the GetEnergy Awards website.

Among those on hand for the awards ceremony was BNE Chairperson Susan Morrice. A native of Belfast Northern Ireland, Susan’s home base is Denver, Colorado. Susan was one of the founders on BNE and helped put together a team of Irish investors to help fund initial drilling, gave credit to the people of Belize who “rose to the occasion to not only make BNE an award winning company, but to make it an award winning Belizean owned company!” Susan said that BNE is unified by “The philosophy that we all have the oil within us in the form of our dreams and just like the oil in the ground, while it was always there, it takes the right mindset to draw it out.”

Erin Ryan, Human Resources Manager, who was also at the awards recently posted to the company website, described this BNE vision:
“At Belize Natural Energy, our vision is to be a leader in the oil and gas industry by creating opportunities for our employees to mine their potential within. When the company commenced drilling operations in 2005, the oil and gas industry did not exist in Belize; labor had to be imported. The owners of B.N.E. decided to make it a Belizean company—a place where Belizeans with the right attitude could find a home. Today we have two hundred and four employees; ninety-six percent of whom are Belizean. We are led by a Belizean C.E.O. and fifty percent of our management team are women. This was only possible because of the deep rooted commitment to training and educating our people. We are particularly proud of our primary education literacy program. The lack of adult education services in Belize is a huge obstacle for anyone that couldn’t finish primary school. We knew we had to be a part of the solution.”
Dr. Gilbert H. Canton, who is a Belizean and President & CEO of BNE said on the company website, “…Even though BNE is still in its early stages of development, our efforts have made a significant impact on the socio-economic development of Belize through income and employment generation, foreign exchange earnings, health and education support activities, and community development.