I was honored to be invited the Pushkin Trust’s 25th anniversary dinner held at the brand new Titanic Belfast building in the heart of the Titanic Quarter. If you haven’t had the chance to visit this exhibit, you must make it a priority when visiting Belfast. The Northern Ireland Tourism Board identified it as one of five key tourism projects to enhance Northern Ireland’s tourism. 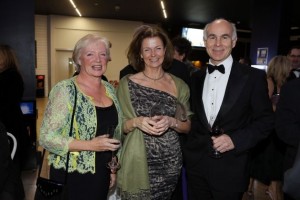 I have to say, the revitalization of this portion of Belfast makes me very proud. My hometown has been a very troubled portion of the world for many years and this project is bringing a prosperous and thriving area to the city that was in desperate need of change. The building itself resembles the hull of a very large ship and makes you feel quite small upon approaching it. From what I understand, the design was influenced by maritime themes that include ice, ships’ hulls and the White Star Line logo, which was the company that built Titanic.

Choosing the Titanic Belfast venue for the Pushkin Trust dinner was a fantastic decision. The Duchess of Abercorn, who is a direct descendant of the acclaimed Russian laureate, Alexander Pushkin, founded the Pushkin Trust in 1987. The Trust provides creative education programs for over 50,000 students, teachers and student teachers throughout Ireland. The prize is being spread to the United States and Russia from where it was established with Ireland and the Duchess being the catalyst of the program.

I hope the Pushkin Prize will be an important theme with leaders throughout the world in the future. The drawing out of the creative force within us and encouraging it’s blossoming in the children while releasing the child within all of us will bring leaders together. Any leadership gathering should have a goal of drawing out a common energy out of their people for the good of the growth of their nations and indeed the greater good of people throughout the world.

For the 25th anniversary dinner, the Duchess welcomed guests including Mr. Alexander Kramarenko, Minister-Counsellor of the Embassy of Russia to Great Britain and Northern Ireland, where he was the guest of honor. Mr. Kranarenko spoke about Alexander Pushkin saying he was the, “the Shakespere of Russia that held the heart and soul of the people through all the difficult times.” The dinner was also filled with all types of supporters and contributors to the Trust, who I know all support creative education and learning for children.

The Duchess’ work inspires me to work towards a similar foundation here in Denver. I am working with the Duchess to bring the Pushkin prize to the US. I sincerely believe that non-traditional education of our youth is beneficial to their development and growth. Creative programs in schools here in America are consistently being cut and students aren’t being exposed to music, art and sculpture. In addition, conventional curriculums aren’t inspiring students to use the energy and spirit that is within their characters. They are being pre-conditioned to accept certain concepts that, while being legitimate, are stifling their creativity, imagination and resourcefulness. Unlocking this conventional thinking is how we are going to evolve and accomplish things never before imagined.