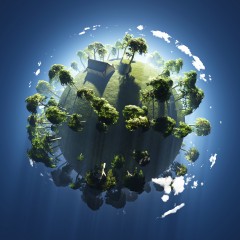 Many people ask me questions about energy production and exploration, our approach and how we address environmental concerns. Fortunately, I was able to become involved with a colleague of mine who is working directly with young students. She is has a curriculum focusing on energy, the economy and business. I worked with her to come up with these questions that are pretty common in my profession. I thought I would share them with you!

Q: What clues do you need to look for when deciding to explore in an area such as Northern Ireland, especially when there is no oil there?

A: I studied the rocks along Belfast Lough when studying geology at Trinity College. These rocks, by their position and type, showed me that there was an ancient ocean right there called The Proto Atlantic. Donegal was stuck to Canada and the south of Ireland was part of Europe and this ancient deep ocean was separating them 300 million years ago! This setting is good for lots of organic matter to accumulate as it does in oceans today. This matter, in turn,  is heated, squeezed and cracked over millions of years into hydrocarbons of oil and gas. So the local rocks give the clues to the plate tectonic history of the area. I remember when I first explained this to a few people during the troubled times they said, “can we get back to that again?”

Q: So its rather like being a time traveling detective?

A: Yes it really is because you know what rocks are the best “source” rocks for oil and gas, while also knowing what are the best for reservoir or storage. You have to guess at the migration pathways, which are quite often fault systems which are also caused by plate movements. So its putting the entire puzzle together but there are always lots of unknowns. A leap of faith is required in the end which is the risky bit.

Q: Tell us more about that.

A: It is so important to be able to imagine and dream of the best outcome for everyone involved. Its having big goal and seeing it in your minds eye. Visualizing the success of the project keeps my team focused on the positive result. I use the visuals of cheering crowds all around the well, the entire Province jumping up and hugging their TV and the children having art competitions showing how they see their town or area transformed by such an exciting success. I can also envision people having tears of happiness in their eyes because they know their dreams came true. Projects like these can continue to make a difference in people’s lives while giving them joy and purpose in a profession. To see, feel and taste this success for everyone is so rewarding. Seeing all sides, of what once was a divided troubled area, rejoice together is truly a new beginning for all.

Q: So painting this vivid picture of success and discovery and all it will bring to Northern Ireland is a key piece of the exploration puzzle?

A: Yes, indeed. Its like any goal setting but its bigger and holistic when you are really involving everyone in the vision…a win-win for all.

Q: Against this exciting backdrop of exploration and vision, what role does the controversial “fracking” play?

A: To give a little more background, oil and gas are the key components of the global economy right now. They fueled the second phase of the industrial revolution, which doesn’t mean it will always be this way. We need to encourage creativity and inventiveness, not stifle it. The open, relaxed mind is a clear connection to a creative source of ideas and inspiration. This should be encouraged in schools and our children who are born with this curiosity naturally. Their creative and curious spirit is often inadvertently squashed by negative programs put onto them by parents, teachers and society. It is this innate source within us that, when clear, will find all the new inventions and new forms of energy.

Until then, oil and gas propel our society through plastics, electricity and petrol, among other things. So we endeavor to extract every drop of it from under the ground. When the rocks have lots of holes in it, like a porous sandstone you would find at the beach, then fracking is not needed. The natural pressure of the earth, when drilled, pushes the oil or gas out and up the hole into a pipeline. Then it is taken away by tanker or pipeline to be sold. If the rocks have very little holes in them but still contain oil or gas, then a decision is made as to how to get the oil and gas out. If you crack open the rocks a bit it allows these hydrocarbons to flow out, which is usually not as good as mother nature’s natural porosity and permeability. Since our economy still requires oil and gas, a decision is made based on environmental sensitivity and economics. Entire towns and cities throughout the US are run on this type of “tight” gas. It has been the backbone of America. Fracking has been going on, very successfully, for over 60 years. As with everything, it depends on the people involved. Some people will cut corners in every aspect of  their life, with the energy industry not being an exception. However, there are many oil and gas operators that will always put safety first. They value their reputation more than making a fast buck, as they say here in America. My view would always be to  go with the flow of mother nature. Follow her signs, her naturally occurring fractures, and drill horizontally gathering oil and gas in more efficient quantities. It is much more environmentally friendly. It costs a little more, but it is worth it.