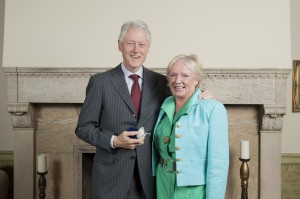 Today, I was very fortunate to attend the Clinton Foundation Luncheon here in Denver hosted by Amber and Mike Fries. Mike is the CEO of Liberty Global and is very involved in the local community. Amber and Mike brought together a very impressive group of supporters for the lunch, which was focused on fundraising to assist the Foundation in accomplishing their considerable goals. The Foundation was established with a complex mission to address many monumental challenges the world is enduring. Global health, economic strength, healthy children, and protection of the environment are the issues that the Foundation focuses on. It reaches out to governments, businesses, private individuals and non-profit organizations to support their mission and realize their dreams.

I have been a big supporter of Bill Clinton even prior to his US Presidency. His work as the Governor of Arkansas really showed me that he pursued public office, not as egotistical pursuit, but as an individual who is really committed to improving the world. His overhaul of the educational system in Arkansas was a genuine act that gave so many underprivileged children the tools and support they need to become productive members of society. President Clinton’s deeds also hit close to home for me during his presidential terms.

Being from Belfast, I have seen first hand how ignorance, hatred and intolerance negatively affect a population, culture and country. President Clinton and his wife, Secretary of State Hillary Clinton, used their considerable influence to help facilitate the end to “The Troubles” in Northern Ireland. Another leader could have easily overlooked the suffering and pain tolerated by the people of Northern Ireland. He brought much needed attention to the struggle through visits to Belfast and addressing it in his public speeches. By reaching out to both sides of the dispute, President Clinton and local attorney Jim Lyons, were instrumental in getting the Good Friday Agreement signed in 1998.

During the luncheon, President Clinton shared why he started the Clinton Foundation. His commitment to finding actual solutions to some of the world’s biggest problems is the source of his vision.  The Foundation’s mission is directed at achieving measurable results, without being a political platform with ulterior motives. President Clinton and his Foundation are genuinely committed to defeating inequalities, promoting the values of fairness and providing opportunities for all people. After the presentation, I was also able to present President Clinton with a copy of “The Magic In You”, by Emma Marie. This is a great book telling the story of BNE and how we succeeded in spite of all the hurdles.

I am truly blessed to be a supporter of this organization and encourage everyone to get up, take part and make a difference. Want more info? Visit clintonfoundation.org.