A night of firsts

Texas…the land of cowboys, oil and cattle. My first experience with the unique state occurred back when I first moved to America and was traveling from the South to Colorado. I was driving through the panhandle with just my dog, when I stopped my car in a fairly desolate portion of the countryside. I didn’t know it at the time, but I experienced being completely present in that moment, which is one of the things I learned years later at the Educo Seminar. I gazed at the landscape and knew I was observing the American dream. This is what I had traveled across the Atlantic for: to chase my dreams, achieve success and help others do it as well. I didn’t know how I was to do it at the time, but in retrospect, I realize it was a positive experience that I continue to use in my memory management techniques taught to me by Dr. Tony Quinn.

Several years later, I am back in the Lonestar State at a beautiful hotel filled with many well-known people, who invaded the Grand Ballroom of the Adolphus Hotel in Dallas. The American Ireland Fund was holding its Inaugural Emerald Ball benefiting hundreds of charities in Ireland, both North and South. It was a lovely event that had many celebrities including American Football greats, Daryl Johnston and Roger Staubach.

A very enjoyable portion of the evening for me was getting to interact with Northern Irish First Minister Peter Robinson and Deputy First Minister Martin McGuinness. These two individuals are working together in the Northern Ireland government, which everyone thought would never happen. Once bitter rivals, Ministers McGuinness and Robinson embraced peace in Northern Ireland and continue to focus on the needs of the people of the province. 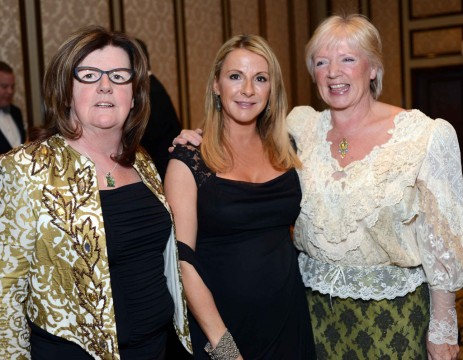 It is a very proud moment for me to see leaders of my home province working to end violence, sectarian strife and negative mindsets. Patricia Fitzpatrick, who accompanied me to the event, and myself encouraged the Ministers to research the seminars by Dr. Quinn that can really make significant change in long standing attitudes of not just individuals in positions of power, but young students, influential business people and the population as a whole. We were tremendously excited to see the interest both Ministers had in our ideas and strategies.

Other individuals we enjoyed speaking with were Irish Consul General Aidan Cronin of Chicago. Mr. Cronin’s main responsibility is to protect the citizens of Ireland living in the United States and to facilitate trade and friendship between the two countries. I think his mission and mine have some synergy that can be beneficial to both of us.

All in all, we really enjoyed ourselves at the American Ireland Fund event. It was a great example of how removing old, negative mindsets help us all focus on positive, constructive and beneficial goals that can change the world. I think the effort and trust put forth by Ministers Robinson and McGuinness is life changing, not just for the citizens of Northern Ireland, but the entire population of the United Kingdom and Ireland. I would love to work together with them to educate, encourage and inspire their constituents and the rest of the world.